This week the podcast explodes or really Brian does when the news of the Prometheus sequel Alien: Covenant reaches his ears.  In fact the sequel has us all scratching our heads. Not as much as rockstar David Bowie does. Yes, I said David Bowie. Seriously. But it not all rage this week as we discuss The Walking Dead Negan leaked footage. Spoilers ahead folks. Netflix’s Jessica Jones and Iron Fist plus Mystery Science Theatre 3000 returns on turkey day. A review of Vader Down #1 and sing along as the guys rediscover John and Al Kaplan’s Predator The Musical. All that and more shenanigans this week on The House of Gozer Podcast.

Talk about Big..how bout some MST3K on Turkey day?

Since launching on November 10, 2015, the MST3K Kickstarter campaign has rallied over 21,000 fans, raising more than $2.3 million to help bring the beloved cult series back to life for a new generation of fans.

The Official synopsis:
Ridley Scott returns to the universe he created in ALIEN with ALIEN: COVENANT, the second chapter in a prequel trilogy that began with PROMETHEUS — and connects directly to Scott’s 1979 seminal work of science fiction. Bound for a remote planet on the far side of the galaxy, the crew of the colony ship Covenant discovers what they think is an uncharted paradise, but is actually a dark, dangerous world — whose sole inhabitant is the “synthetic” David (Michael Fassbender), survivor of the doomed Prometheus expedition.
So, there will be two monsters? Where’s Shaw at?? David creates the Xenomorph???
Aw Fuck!

Is a Justice League Dark Film on the Horizon?

Ron Pearlman as Swamp thing. Colin Farrel as Constantine. Ewan McGreagor as Jason Blood, Throw in Zartanna and Deadman and you have Justice league Dark.
This comes from Latino Review so take it as we all do with a grain of salt.

and to add more salt, Ben Mendelson of Rouge one and The Dark knight rises may be playing Swamp Things Nemesis Anton Arcane.

While the dudes at Jo Blo are claiming that the Evil Dead Fede Alvarez & Big Bad Wolves duo Aharon Keshales & Navot Papushado are the studio’s top choices to helm the movie.

The studio is so pleased with Guillermo del Toro’s

script, they’re pushing for production to begin as soon as early next year. If this is true, we should expect the film to be given a 2017 release date.

The Walking Dead is going to knock the Season 6 finale right out of the park.

With only two episodes to go until the mid-Season finale and all roads are leading to the big man himself. Neagan. Episode 607: Always Accountable saw the introduction of Dwight, Sherry and The Saviors. All characters that are linked to Negan, to be played by Jeffery Dean Morgan.
How do I know well.
Per Austin Amelio’s twitter feed, the actor who pays Dwight
“Headed back to Georgia to wrap up season 6! This season is going to be insane! Owwwee!”
Did you guys check get to see the shitty cell phone video of Negan?

Well we can’t post it since it’s been taken down everywhere but we can post a pic of it and we have a pretty good idea of who it going to be meeting the barbed wire end of Negan’s best friend Lucille.
Were not going to spoil it here. If you wanna know give Episode 86 a listen.
http://traffic.libsyn.com/houseofgozer/Episode_87_If_it_Bleeds_We_Can_Kill_It.mp3
We can show you pictures of the Hilltop where Paul ” Jesus ” Monroe is from and it will all be seen in the 2nd half of season 6 in February 2016. 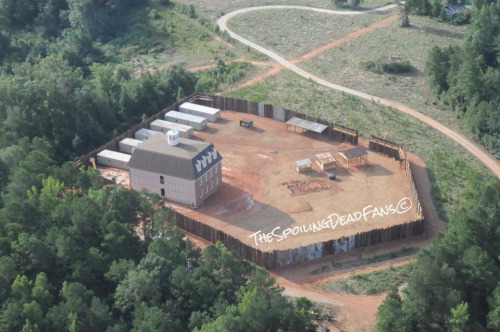 Picture from The Spoiling Dead Fans.

THIS IS THE COOL SHIT

Friday the 13th: The Game is being developed for PC, Xbox One and PlayStation 4, for release in Fall, 2016.

As seen in the 1986 horror classic ‘Aliens’, this full-sized replica stands almost 36” tall, and articulated flaps with a wire armature allow you to actually open the top folds of the egg. The included full-size facehugger has a bendable tail, so you can pose it anywhere… waiting to drop on unsuspecting prey from overhead, or simply lurking inside the egg.

The Life Size Xenomorph Egg is made of detailed, hand-painted foam and stands on its own. A switch activates the LED lights inside the base to create a menacing, otherworldly glow effect. Requires 3 AAA batteries, not included.

and speaking of Alien. 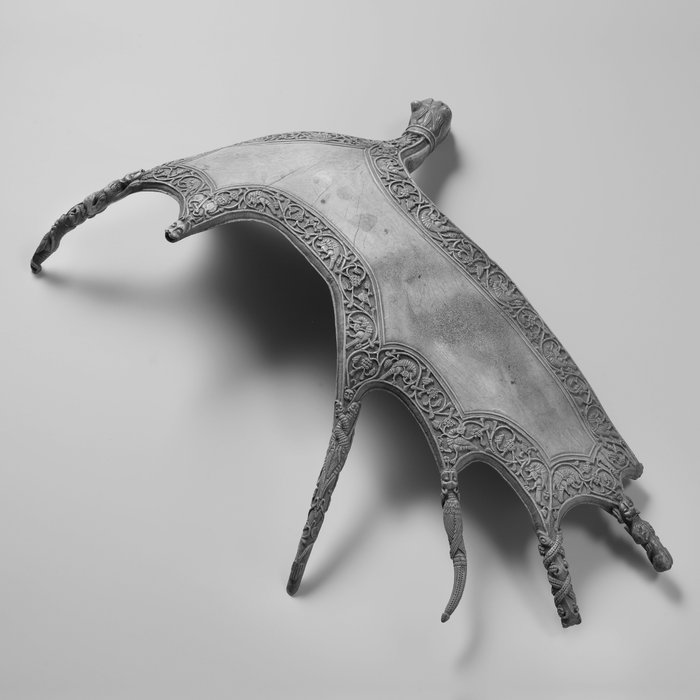 We talk about score on here from time to time, this one no so much a score but rather a unique sound journey. from German Musician Stephan Methieu
BEFORE NOSTROMO is a homage to the sound design for Ridley Scott‘s science fiction classic Alien (1979)
Minutes before the Nostromo crew awakes from hypersleep, each member has a dream.
There are nine pieces of music.  Each one a different crew members experiences while in Stasis.
It’s a pretty crazy idea and it’s down really well. This guy real as captured the ambiance and feel of the film in ways the score doesn’t.
You can check it out at http://schwebung.bandcamp.com/album/before-nostromo
Costs about 10.00 and you get it digitally.
and I will put a link up on the website.
Really amazing stuff. It’s like your on the nostromo. 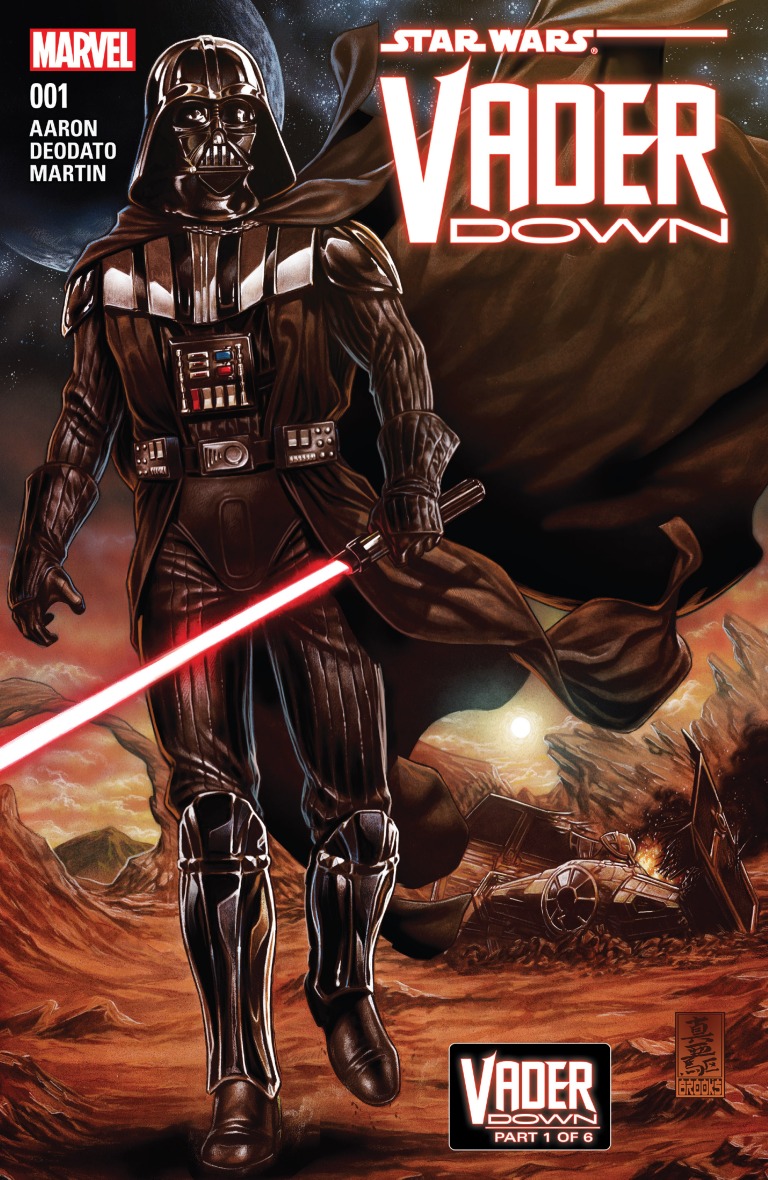 Darth Vader on the hunt for Luke, Vader gets cut off from the Empire and shot down over a planet called Vrogas Vas, and the Rebel Alliance leap at the chance to capture one of the Empire’s most prominent figureheads. But even before Vader gets taken down—by Luke slamming his X-Wing into Vader’s TIE in a suicide run that nearly kills them both—we’re treated to the immense spectacle of the Dark Lord of the Sith eviscerating squadron after squadron of Rebel ships.

The Highlight of the Darth Vader regular series is seeing his be a bad ass.

The prequels deminished his reputation so to speak and seeing Vader being a complete bad ass reminds us that he was more than the conflicted Sith in Jedi or the Sad Panda in the prequels.
Darth Vader was feared and Vader Down cements that.
****
How long can you last ?
https://www.youtube.com/watch?v=kszLwBaC4Sw
and last but not least
https://www.youtube.com/watch?v=qlicWUDf5MM
You can find more on these two genius
http://www.jonandal.com/home